As many of you have probably heard, there’s a shortage of truck drivers and many industry professionals say women are the fix. Well lucky for us we recently gained another female driver, but in our manufactured housing division, one that hasn’t seen a female driver for over 2 decades! We are thrilled to welcome Kim Blocher to the Star Fleet family! 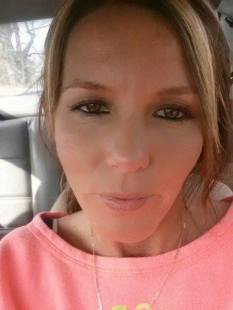 Kim has only been with us for 6 months, but she’s been an escort driver for 20 years and has been around trucking her whole life. Her biggest inspiration, her dad, has been a truck driver hauling houses his whole career & her fiance, Adam, instilled in her that she could become a truck driver herself. Combining all of that, here we are today!

Kim calls Indiana home, but loves hauling to Florida because it’s always warm there. We agree – even in the winter when it’s 40 there, it’s a lot warmer than here! While out on the road, the funniest thing she saw was a guy on his cell phone driving on the wrong side of the road like he owned it all. Eeek! We’re glad you were able to avoid an accident with him!

So far Kim is loving everything about this career especially with all the respect she gets from other drivers knowing she’s stepped into an industry where women are few. She’s further respected and floors many other drivers because of her smaller size driving a large truck pulling a lot of weight. For any woman looking to make trucking a career here is her advice, “Women are just as strong as a man. They are mentally and emotionally stronger than men and can be anything they want to be, so why not follow your dreams and try it?”

We couldn’t agree more & we are so glad Kim chose to #DriveForStarFleet.

Managing Money on the Road

As an owner-operator truck driver, you have more expenses than a company driver, but hauling RV’s for Star Fleet also allows you benefits that they don’t get (run at your pace, travel the roads big trucks can’t, a choice of where to go, etc). Managing your money spend, especially while on the road, is no easy task, but we’re here to help you get the most out of your money! Below are some small, but easy & mighty ways to save some of your hard earned cash.

What other tips do you have for saving money as a driver?

Announcing a few changes to our photo contest, below is an updated list of participation rules.

That’s it! Finalists will be selected based on how engaging the photo is, quality, and overall mood. Please note, by submitting your photo for our contest, you are giving Star Fleet permission to use that photo in future Star Fleet marketing and advertising.

Fun Facts for Each US State

In this country there are 50 fantastic states, but how much do you really know about them? Read on & you’ll find a fun fact for each state the next time you visit!

Alabama – Magnolia Springs is the only city in the US to have mail delivered by boat.

Alaska – Experience around 5,000 earthquakes per year.

Arizona – Can experience the nation’s highest & lowest temps in the same day.

Arkansas – The Ouachita Mountains ridges run east/west rather than north/south.

California – Has a higher population as a state than the entire country of Canada.

Connecticut – One of 2 states that failed to ratify the 18th Amendment (manufacture, sale, or transportation of alcohol).

Delaware – The only state to have no commercial flights in or out of the state.

Florida – Has the lowest high point of all the states. Britton Hill is just 312 feet.

Hawaii – Had their own currency issued during WWII & was their only legal tender.

Idaho – The only state seal designed by a woman.

Illinois – Chicago is the third largest city in the country.

Indiana – The Indy 500 Speedway has the highest spectator capacity than any sports arena in the world.

Iowa – Fort Atkinson is the only fort build by the US to protect one Indian tribe from another.

Kansas – Leads the country in wheat production…is there really any surprise?

Louisiana – The longest bridge in the states is Lake Pontchartrain Causeway at 24 miles.

Maine – One of the first places you can see the sun rise in the US is in Acadia National Park.

Maryland – Part of the panhandle squeezes down to just 1.8 miles.

Michigan – Highway 185 is the only official US highway that does not allow cars.

Minnesota – In 1952 the first open heart surgery was successful.

Missouri – The tallest manmade monument is the St. Louis arch.

Nebraska – The only state with both east and west borders that are water.

Nevada – Close to 85% of all land in the state is owned by the government.

New Hampshire – The American dollar was designated the standard in 1944.

New Jersey – Has the longest red light which is in West Milford having you wait 5 min.

Ohio – Home to the shortest street, McKinley Street. It’s in Bellefontaine & is only 28 feet long.

Oklahoma – The state vegetable is watermelon…yea we don’t get it either.

Oregon – Leader in Christmas tree production as well as producing 99% of the nation’s hazelnuts.

Pennsylvania – Centralia’s ground has been on fire over 50 years from a coal mine fire & is expected to burn another 200 years!

South Dakota – Agriculture is the top industry with 98% of the state’s farms being family owned & operated.

Utah – I70 contains 106 miles of interstate with no fuel stations, the longest in the country.

Vermont – One of the first ski lifts was developed in 1934.

Virginia – The infamous speech that included, “Give me liberty or give me death” was given in Richmond.

Washington – Largest producer of apples, pears, & sweet cherries in the US.

Wisconsin – The republican party was established in 1854.

What fun state facts do you know?

Worst Roads in The U.S.

In an article written by Business Insider this last summer (http://www.businessinsider.com/states-worst-roads-2017-6/#2-connecticut-21512-miles-of-public-roads-with-57-in-poor-condition-7),  they told us that America’s roads received a D on our infrastructure report card from the American Society of Civil Engineers then listed the 8 worst roads in the nation including our capital. They are as follows:

Do you agree? What roads do you think are the worst?

Benefits of being an RV Transporter

Lately we’ve been asked quite often what the benefit of being an owner-operator RV transporter and working for Star Fleet Trucking is. While our contractors come from a variety of backgrounds – construction, military, finance, government, medical, retail, etc. – they all came to us & stayed for much the same reasons.

If you know someone interested in this line of work, let them know the benefits straight from the source…our contractors!

It’s the most wonderful time of year…but whenever we feature one of our drivers, it’s always a wonderful thing that we love to do. This month we’re featuring Mr. Dennis Kline, one of our oversize drivers from the Middlebury North terminal.

Although he’s been with Star Fleet for a little over 7 years, he’s been transporting mobile homes for over 22 years. Talk about dedication & loyalty! The funniest thing he’s seen out on the road was actually here in the area when he saw a buffalo head in the middle of an intersection near Nappanee on US6. How strange and creepy that must have been!

In all Dennis’s years of transporting, he’s been to every state a few times, but says his favorite is Wyoming. Not only is his beautiful bride from there, he also loves the beautiful country out there. We can’t disagree!

Along with his love of that state, Dennis also loves welding and mechanics which are great skills to have in this industry! He also claims he’s very skilled at not staying out of trouble, but we have yet to see that especially since the office staff says he’s always in a good mood whether he’s having a good or bad day. However he does get picked on a little because if you put his first initial and last name together you get DKline. Poor Dennis!

We wouldn’t pick on him if we didn’t like him & we’re so glad he chose to #DriveforStarFleet!

With Thanksgiving coming in the blink of an eye, we’re so thankful for all our contractors who do so much for this company, but for this month we’re featuring Ronnie Rogers out of our Middlebury 151 terminal. Ronnie just celebrated his first year with us about a month and a half ago & we’re thrilled to see him succeed!

Ronnie did serve in the military (thank you for your service!) & we’re sure it’s helped lead to the 3 words he describes himself with – reliable, honest, & hardworking. When he’s not working hard he enjoys watching football and UFC and spending time with his grandkids while dreaming of the day he gets to take an Alaska trip, an item he still needs to cross off his bucket list. Perhaps his terminal manager can help with that.

Thank you for everything you do Ronnie & for choosing to #DriveForStarFleet!

Safe drivers aren’t just something we want; in our industry it’s necessary. Without them, many companies would go out of business and the rest of us would probably have less “stuff,” to put it simply. As the weather across the nation turns colder and more slippery, we find it important to remind our contractors of safe driving practices.
So what are the makings of a safe driver? Well it depends on who you ask – the insurance company will say someone with no accidents, your grandparents might say someone who doesn’t speed, and some may just say men. However, for us, we believe a lot of it lies in the Smith System which is made up of the following 5 steps:

Let’s break down what each of these means.

Aim High – this refers to steering and focusing your attention on the road as a whole and not just what’s right in front of you. This will help avoid rear-end accidents while alerting traffic behind you to slow down.

The Big Picture – Pay attention to how other drivers are driving & have an awareness of your surroundings…always!

Keep Your Eyes Moving – Fatigue on the road is nothing new & while a good rest can never be replaced, one thing that can help is to move your eyes consistently, although not repetitively as that can worsen fatigue.

Leave Yourself an Out – Don’t get in a position on the road that you can’t get out of.

Make Sure They See You – Stay out of drivers’ blind spots and make sure other drivers know your intentions.

Keep yourself and your fellow drivers on the road safe – know your limits and when you reach them and pull off the highway. Do you use the Smith System? What other tactics do you use to stay safe?

The weather may be getting cooler, but things here are just starting to heat up as we head into busy season! For October, we want you all to meet & say hello to Randy Schmucker. Randy is a part of our Middlebury North location hauling houses. He has been with Star Fleet for 1 1/2 years, but has been transporting since 2012.

One of the funniest things he’s seen driving is when another driver was attempting to play a prank on him and then was pulled over by the police because of it. Talk about karma!

Randy is from Warsaw, IN, just a short jump away from Middlebury and what you may be surprised to find out about him is that he is a certified EMT, certified landscaper, brick layer, member of the American Red Cross, and a manager of a shelter through ARC. He also worked at the 2010 winter Olympics; now that’s a jack of all trades!

However when Randy isn’t working hard, he loves to ski in Colorado. It’s his favorite state because, “The mountains are amazing and gives a good view while I ski.”

We’re so glad to have Randy on our team that he chooses to #DriveForStarFleet.